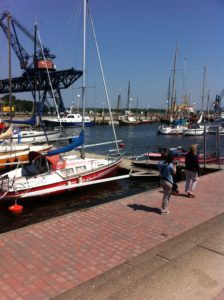 At first glance Rostock may not seem your typical travel destination.  On the day we arrived in port, the sun was hidden by heavy gray clouds and the first landmark we saw from the bow was a nuclear power plant.  But there is more than meets the eye in on the coast of Germany.

Usually we have a local guide to meet us at port and guide our journey, but we didn’t in Rostock.  That meant we needed to find transport to our first restaurant of the day.  We could have gone the traditional route and found a taxi, but we decided to roll the dice a bit and talked our way on to a cruise crew bus “into town”.  We soon found out however that this bus wasn’t going to town, but instead to a shopping plaza that all crews visit.  No problem – we had fun and met a crew that really enjoyed their 15 minutes of fame on camera. 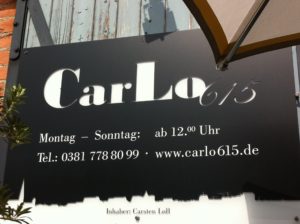 We got off the bus mid-trip, found a taxi and made it to our first destination on time, Carlo 615, where Chef Carlston Loll prepared a fabulous fish and potato dish with me at his side in the kitchen. Wouldn’t you know it – the sun came out just in time for us to dine outside with a lovely harbor just steps away.  I would be remiss if I didn’t mention that Chef Carlston not only fed me but my crew and friends as well – a real class act.

Next stop was the old town where I found the German food I was looking for – wursts!  I had bratwurst, bockwurst and kepwurst (a wurst I never heard of.) Washing it all down with a tasty Rostock Beer and then a walk to work off those calories before heading back to the ship (ironically, for more wursts and beer.).  The best of days, the wurst of days… 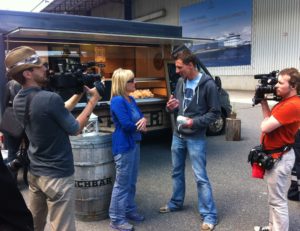 Kiel is known for sailing and so we head straight for the waterfront for a short ride on a cutter. I was a bit hesitant at first since the weather was a bit gray and miserable when we arrived but I knew I’d regret it later if I didn’t go (plus the film crew was not having any of it!)  Sure enough, we had a blast.Next we met our guide for the day, Eva Zeiske of Kiel Marketing.  Her recommendation?  Get fishy, so we headed straight into a very tasty lunch at the Fischbar – a pop-up food truck restaurant along the waterfront. I had a herring in red wine sandwich that was outrageously good. I got to chat with one of the owners about their concept of simple but top quality foods in this fast food style and was “hooked”.  To whet our whistle we make a quick stop at a local beer pub, Kieler Brauerie, where the atmosphere is almost as good as the ale.

Not done eating great food yet, we next set out for the restaurant Foerdeblick, located by the Kiel lighthouse. The day had turned gorgeous, filled with people sitting outside sipping their beers and eating massive portions of exciting looking seafood dishes.  We followed suit with guidance from Chef Jan Horstman who prepared a few dishes (I assisted a bit).  The highlight of the day…maybe the trip even, was when he showed me how to eat ‘kielerschbrotten’, a tasty little cured herring dish. Of course, this being Germany, there were also potatoes on the menu. Another tasty day!