After a relaxing day at sea on the Veendam we arrive in Charlottetown, Prince Edward Island, the birthplace of Canada. First stop is just down the road from the cruise terminal, the newly renovated Merchantman Pub. Literally putting on the finishing touches like decks and interior furnishings, Chef Adam was still ready and able to sit with me and share some of the island’s highlights, their oysters. Lucky limes, raspberry points, pickle points and shiny seas all went down easily and without any need for condiments. Smooth, salty and even creamy I just wanted more and more. Chef Adam was very excited to be able to showcase some of PEI’s best seafood. He sources locally and growing up with a father who was and still does farming, he knows how to get the absolute best. If you love seafood you might want to head over to Charlottetown when they hold their famous shellfish festival including an oyster shucking championship. (I can’t even shuck one!) 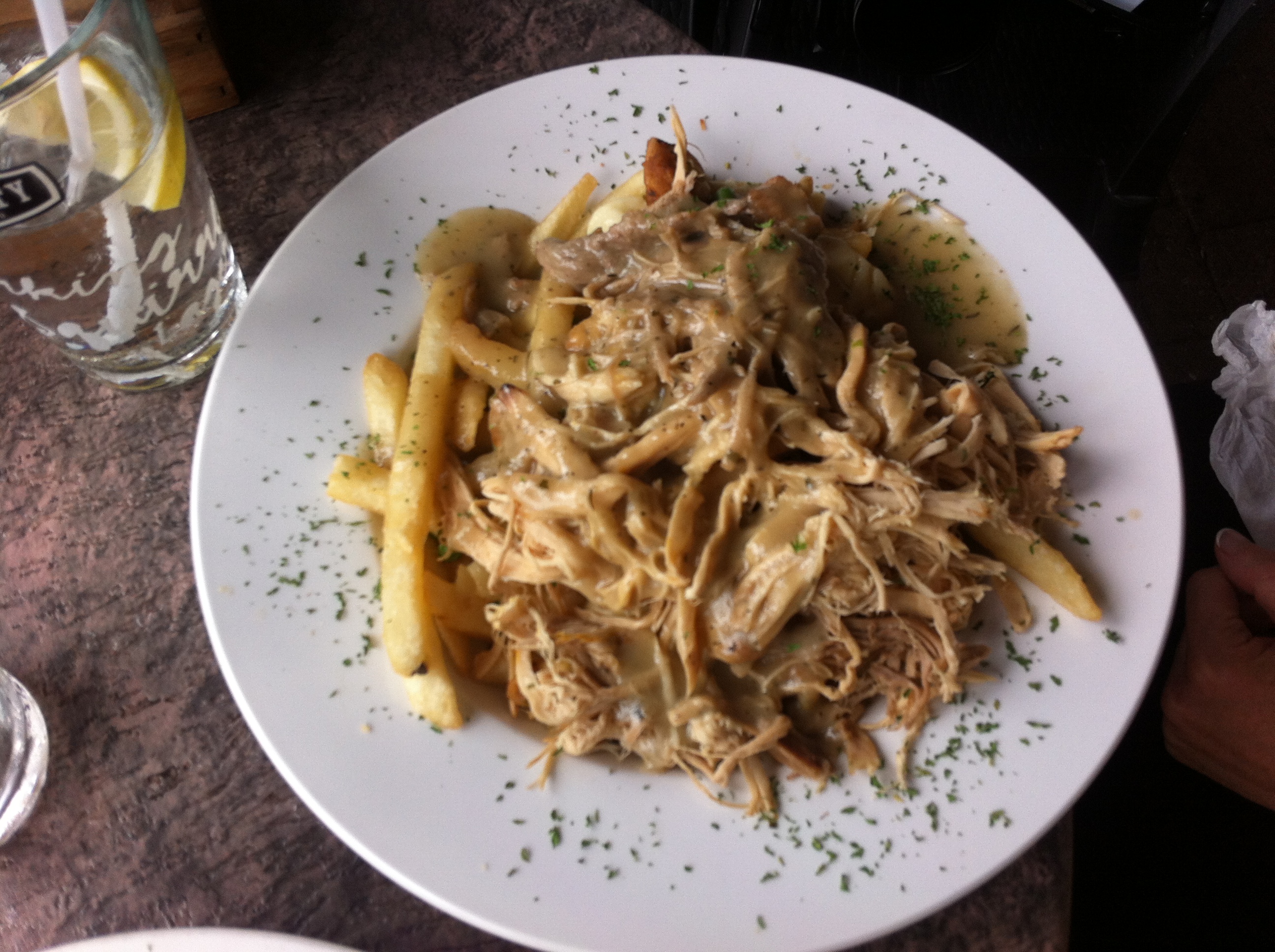 Next stop, a Canadian national treasure.  My guide Corryn said Hunter’s Ale House serves 23 different types of poutine. If you haven’t heard of poutine, it’s a decadent Canadian dish made with french fries, gravy and cheese curds. In this case, imagine that concoction combined with turkey and stuffing, pulled pork or chili. Eating just 1/4 of the mound that was served was more than enough for me. I had the turkey and it was just as if I had a full Thanksgiving meal (minus the cranberry sauce).

Our bellies full, we headed out on a lobster boat run by Prince Edward Tours to hear all about PEI lobstering.  There are 2 lobster seasons on PEI and we were in the midst of the first one. You have to really respect these fishermen/women who brave hurricane force winds at times to haul in these tasty creatures. 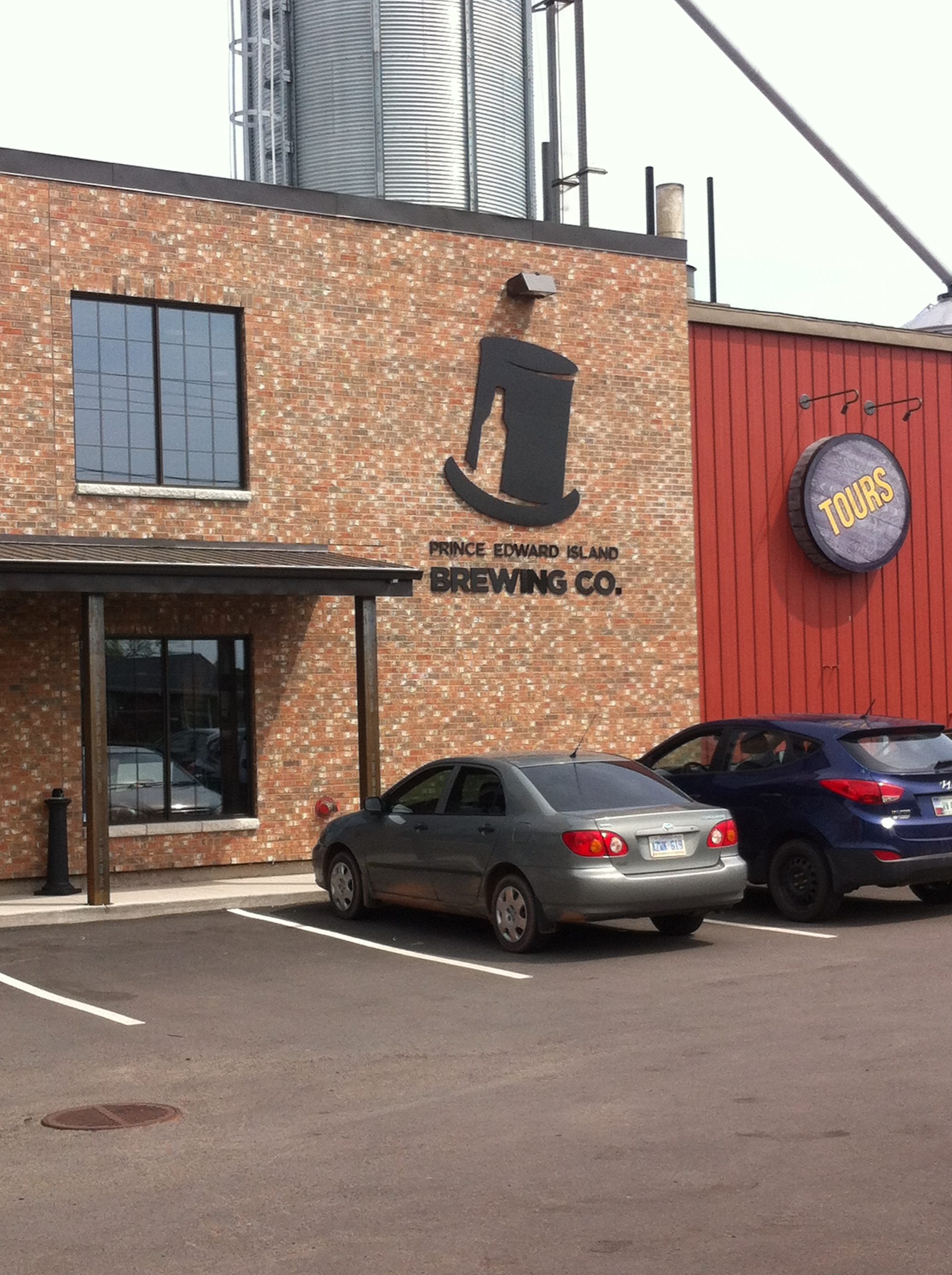 What better way to finish off our day than a visit and tasting at the Prince Edward Island Brewery. Using only all natural ingredients, they brew hand crafted ales, lagers and limited edition beers. I tried 2 of their newer ones, the lobster ale and blueberry ale. The lobster ale was slightly bubbly, citrusy and fresh and was quite like having a light sparkling wine. The blueberry ale is unfiltered and made with local Canadian blueberries. The initial taste is subtle and light and just after swallowing you get that hint of fresh blueberries that is so delicious. Definitely not sweet as you might expect. There was also a mango ale that was again, light and refreshing and the Island red, an amber ale with lots of caramel and a slightly bitter finish (a bit bitter for my taste but would go very well with certain foods). That reminds me, I had been told about one of the area’s most popular snacks called Cow Chips (chocolate covered potato chips). I found some at the brewery and picked at them while having my tasting. Yes, they were addictive and I am thankful that I only had the small bag. I am sure these can be bought online if you want to try some.

Onto Sydney…Nova Scotia, that is.  I have to admit that I am really getting quite used to this cruising lifestyle and finding myself in a new place (almost) every morning, spending the day meeting terrific people, hearing their stories and eating (and drinking) fantastic meals.  Today was no exception as we arrive in Sydney, Nova Scotia on  Cape Breton Island, where I first meet Chef Ardon Mofford at the Governor’s Pub & Eatery, one of the town’s premier Celtic inspired seafood restaurants. Here I have my first ever, “true” lobster roll that the Chef was proud to make for me himself. Big, fresh chunks of delicious lobster blended with homemade mayo, crunchy celery, onions and dill on a tasty homemade roll. Everything made from scratch and utterly scrumptious. I was given a Nova Scotia Moscato and a few local craft beers to taste along with the roll as well (Chef Ardon agreed he favored the Moscato).  Before leaving, I was curious to hear about his upcoming project, “Right Some Good” which I learn is the ultimate pop-up dining event taking place on Cape Breton Island.  International chefs, master chefs and world class chefs will be preparing one of a kind meals using local ingredients and showing all that is special about the area. 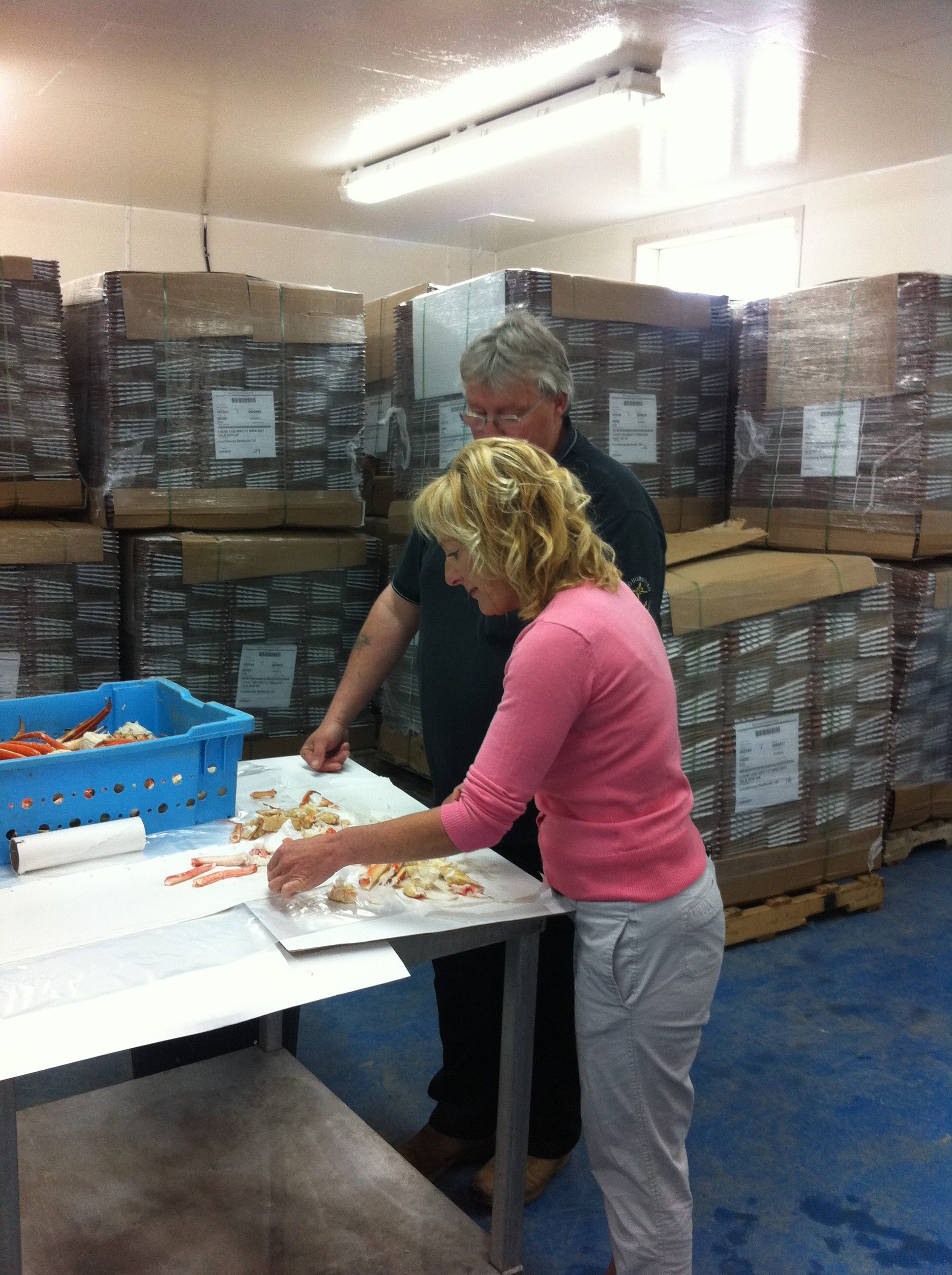 It’s a short and scenic 20 minute or so ride to the small fishing village of Louisbourg and to Mira Bay Seafood where Chef Ardon introduces me to the plant manager who is to give me my lesson in eating snow crab legs. After an embarrassing first few attempts, I almost perfect the technique of getting all the sweet tasty meat out of shells and am glad that it was filmed so I can remember. Derrick then brought me to tour the plant where the crabs are brought in, brined, frozen and prepared for shipping. Suiting up with shower caps and a cover up robe (but, unfortunately, no boots) we headed through the various areas (from the end of the process to the beginning to avoid contamination,) and suddenly we found our feet covered in cool, messy, crabby water that overflowed from the various vats. It was not a pleasant feeling but there was nothing to do but continue and so we did. Needless to say, those sandals are history! Still,  it was fascinating to see the process and I respect those workers a great deal. We even learned a tip about adding a layer of moisture to items you freeze and that will allow you to keep them longer.) 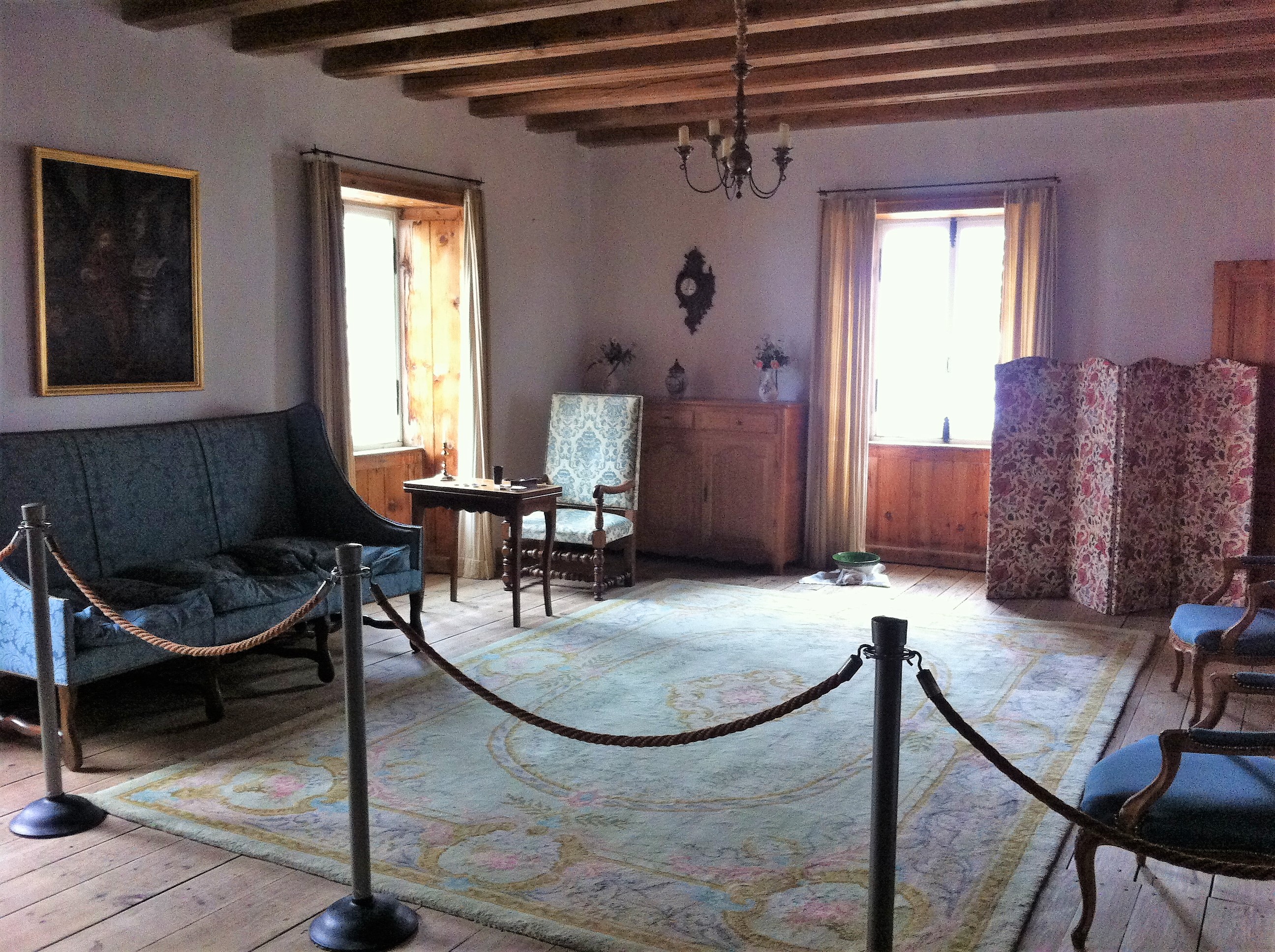 From here it was off to the Fortress of Louisbourg, a national Canadian Historic site where a good portion of the original 18th century French fortress is reconstructed and re-enactments from the time are held. I was taken into the kitchen to try some hot chocolate that was made as it would have been long ago and was a luxurious item for those who could afford it. While there was a lot more to explore at the fortress, alas it was time to head back to the ship ad so off we went.